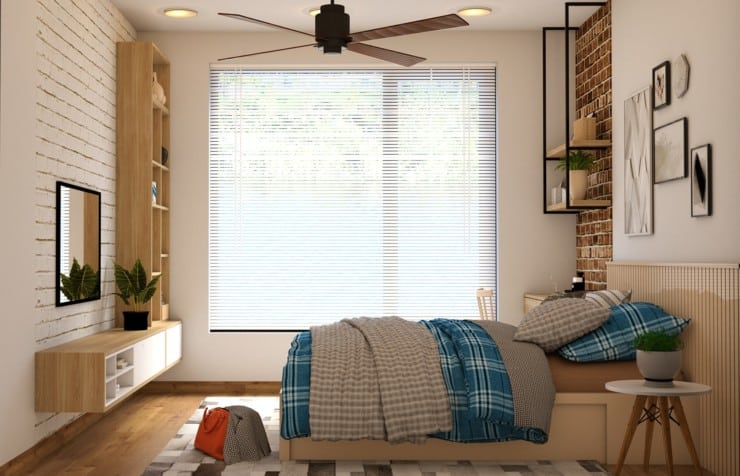 If you want to help cool your modular home, a ceiling fan can help you do it. Ceiling fans are easy to install and come in many different looks that are sure to fit your home well.

Contents show
How to Install a Ceiling Fan in a Modular Home
Materials You Will Need
The Benefits of Installing A Ceiling Fan
Frequently Asked Questions
How do I choose what kind of ceiling fan I need?
How do ceiling fans cool a room?
What direction should I have my ceiling fan on in the summer months?
How does a ceiling fan save energy?
Final Thoughts

How to Install a Ceiling Fan in a Modular Home

If you decide that you want to learn how to install a ceiling fan in a modular home, you will be happy to know that it is not a complicated process, and this is one project you can easily do yourself.

Materials You Will Need

You will need to determine where you are going to put your ceiling fan. Typically, they are placed in the middle of the room. You will want to make sure that you have enough clearance to install the fan.

You will now want to turn the power off to the circuit of the switch you will be using. If you do not cut the power off, you will be shocked. If you already have an existing light fixture, you will want to remove that by removing the screws and disconnecting the wire nuts on all of the wires.

Place the fan box into the hole and use the two screws that are included with the fan kit. If you have a ceiling mandolin, you will want to use it to cover any holes and then cover the base of the fan.

Now you will want to install the fan bracket to the ceiling box. You will use this doing 1 ½ inch screws. Make sure that you pull all the wires into the center of the bracket and then hook one side of the canopy into the ceiling plate. You will now hook the green wires in the fan to the copper ground cable. Make sure that you use the caps provided. You will then do the same with the white wires and the black wires. You will want to ensure that all the wires are snugly secure.

You will now hook up the other side of the fan canopy and mount it. Make sure that the canopy screws are tightened. The fan blades can now be attached. After you have the fan blades attached, you can turn the power back on and test the ceiling fan for functionality.

The Benefits of Installing A Ceiling Fan

If you already have an HVAC system installed in your modular home, you probably are not thinking much about having ceiling fans. However, ceiling fans can help circulate the air of your home and help keep you cool. Here are the benefits that you should consider when thinking about installing a ceiling fan.

You can offset some of your cooling costs by raising your thermostat’s temperature setting and turning on the ceiling fans. If it is cooler outside, you can turn your air conditioner off and just use your ceiling fans.

Ceiling fans can be placed in any room, including areas like your deck and patio.

A ceiling fan can be a great décor piece. There are many different styles and types that will add character to any room.

In the wintertime, you can reverse the direction your ceiling fan goes, and it can help to provide warmth in your rooms. When it is on, it helps your heating system to spread warm air through the room.

Here are some of the most frequently asked questions about ceiling fans.

How do I choose what kind of ceiling fan I need?

How do ceiling fans cool a room?

A ceiling fan helps to blow cooler air around the room, which helps to dry the sweat on your body, making you feel much cooler.

What direction should I have my ceiling fan on in the summer months?

During the summer months, your ceiling fan should be in the counterclockwise direction.

How does a ceiling fan save energy?

There are ceiling fans on the market that will give you overall energy savings. Since you will feel cooler with a ceiling fan, you will be able to set your thermostat at a higher temperature, helping to cut your energy use.

Ceiling fans can help you feel cooler and help move air around your house, which can improve air quality. Ceiling fans can also help to increase the value of your modular home as it can be a huge selling point for potential buyers.