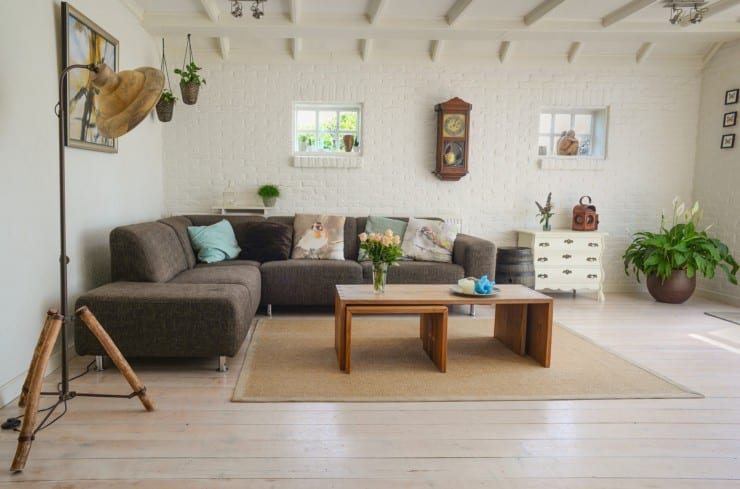 Reverb and decay are the two terms used to describe a gradual reduction in sound.

The unit used to measure it is RT 60. This is the time it takes for an impulse sound to decrease by 60 decibels.

Most of the sounds emitted in a room don’t hit our ears directly.

Instead, they oscillate through the room from the sound source and hit the walls, ceilings, and other surfaces. These surfaces reflect the sound and cause them to hit our ears.

This bouncing of the sound is called reverb.

A reverb is quieter than the direct sound traveling to one’s ears. Spacious rooms and rooms with lofty ceilings can produce distinct echoes.

However, in standard domestic rooms, the echo is termed as reverberation.

Reasons behind reverb in a room

Understanding what causes echo in a room will help us make informed decisions about making acoustic room choices.

If the flat and hard surfaces are parallel in a large room, the sound will bounce back and forth between these reflective surfaces.

The presence of these surfaces will enhance the reflection of sound waves, giving a lively acoustic vibe to the room.

The bouncing of sounds is what gives a room its character. The pitch and mode of reverberation may vary depending on the shape of the room, its size, temperature, and materials utilized to design it.

For example, sound in a long hallway is perceived relatively different than the sound in a small room.

Too much reverb can interfere with the sound and mask it.

Generally, every room has properties known as “modes.” These are the diverse ways a sound can bounce within the room.

There are three kinds of room modes, explained as under:

Axial is the straightforward mode. This is characterized by the sound bouncing between opposite walls, ceiling, or floor.

Tangential mode contains four surfaces for the sounds to bounce off as it revolves around the room. These four surfaces could be two or four walls.

Oblique mode involves the sound bouncing at the six sides of the room. This includes four walls and ceiling and the floor.

As mentioned above, the time for the sound to decay varies between different environments.

For instance, RT could be 3-4 seconds in a hall with bare walls and less than 1 second in a room with soft surfaces like a couch and bed.

If you have a room with a high ceiling, the total length of the room could be exceedingly long. This will increase the size of the room reverberation.

Do all rooms reverb?

Every room has reverberation.

You can hear echoes in large rooms like a church hall. We hear an echo in an ample space due to the limitation of human hearing.

Our ears cannot distinguish between the sound and its echo if the echo hits our ears less than 1/10th second after the original sound.

If the difference in the arrival time is below 1/10th second, we will hear an echo superimposed at the end of the sound.

If the sound keeps bouncing around the room, we will hear a sequence of echoes. In such circumstances, one echo overlaps the other. And gradually, the sound fades away.

What we hear is reverberation.

This is why we cannot distinguish between individual echoes in a room because the gap between the arrival of each is less than 1/10th second.

Why do some rooms sound better than the others?

Not all rooms will create echoes and loud sound reflections. Some rooms sound better than others due to reverberation in a room and how it decays.

Since rooms usually have more than one hard surface, sound can take many routes before it arrives at our ears.

These multiple routes from different surfaces overlap as the sound traveling from other surfaces takes a varying time.

This will determine the level of acoustics in a room.

If you are singing in a room or recording with musical instruments, the reverberation will make the sound smooth and improve its quality.

On the other hand, reverberation is not viable in all rooms. For example, when recording a speech or shooting a video, an echo can make it sound muddy and “difficult to fathom.”

Why is reverberation a nuisance?

The rooms with low RT can sound dead or unnatural.

However, a high RT can cause several issues in specific locations. For example, a space where speakers need to be heard clearly, such as classrooms, conference rooms, etc.

This is stressful for the listeners and speakers alike. Staying in this room and having an ordinary conversation becomes an ordeal.

Thus, it is essential to get the correct RT score in open spaces where multiple activities are happening simultaneously.

In environments like community grounds, offices, and schools, noise from one area can interfere with what happens elsewhere.

How to stop reverberation in a room?

The best solution to resolve the reverb problem is to absorb the unwanted sounds.

Once you know what causes reverb in a room, it is time to work on countering those properties.

For example, you can install soft furnishings or acoustic panels. This is to provide more absorbent surfaces within the room.

Other solutions to the reverberation issue are using plants, sound-absorbing blankets, and using more furniture items, such as a bookshelf loaded with books.

What is the reason behind reverberation?

Reverberation is created when the sound or a signal is reflected.

It causes numerous reflections to build, which will decay as the sound is absorbed by the surfaces of objects inside the room. This could include furniture, air, and people.

What is a reverb decay?

Reverb decay is the time it takes for sound reflections to die away.

Rooms influence the reflection of sound waves within. The most important factors to consider when examining the room reverb are wall distances and surface quality.

Once you determine the reason behind a room reverb, you can move to the next phase of reducing or enhancing it (as per your requirements).